Michelle K. Lee, Under Secretary of Commerce for Intellectual Property and Director of the United States Patent and Trademark Office, visited Chicago on April 16 to discuss current developments and topics in patent law and policy. Banner & Witcoff shareholder Richard S. Stockton played a key role in organizing the program, which included a roundtable discussion between Lee and Intellectual Property Law Association of Chicago Vice President Paul Korniczky (pictured below), followed by a question and answer session with the audience. 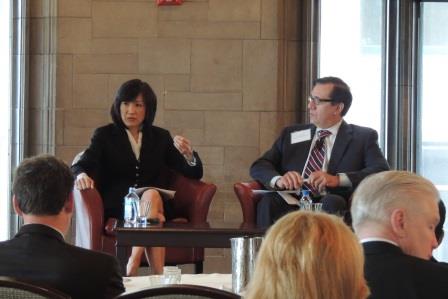 Lee is the first woman to serve as head of the patent system in its 225 year history, and also served as the first head of patents and patent strategy for Google. She discussed several key initiatives of the USPTO and its almost 13,000 employees, including the Patent Quality Initiative aimed at enhancing patent examination and the quality of issued patents. As a principal adviser to President Obama on intellectual property matters, she also discussed current proposals for patent reform legislation pending or under consideration in Congress, as well as the role of patents and other forms of intellectual property in driving innovation.

The program was hosted by IPLAC and held at the University Club in Chicago. 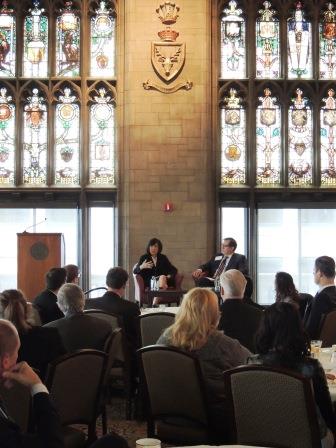